We are going to talk about Roman Seville, or rather we should say Roman Hispalis, since this was the name our city had two thousand years ago.

Seville however was not founded by the Romans but is earlier. It seems that it dates back to Phoenician times, that is, to the 7th century BC. The Phoenicians or Canaanites came from the Middle East, they were a merchant people that had founded colonies and cities throughout the Mediterranean.

They crossed the Strait of Gibraltar and after founding the three thousand-year-old Gades (or Gadir) they arrived at the place where Seville would settle and they would call it Ispal. This was a strategic area due to the access to the copper and silver mines of the southwest of the Peninsula, in addition to its agricultural wealth and finally it was located on the banks of a large river, in an estuary very close to the coast, even more than it is now.

But the city became more important from the second century BC as a Roman foundation as a result of the battle of Ilipa Magna, now Alcalá del Río. According to tradition, Julius Caesar was in the south of the Iberian Peninsula, then called Betica, and he was the one who made the first wall of Seville.

The Temple of Marmoles Street

There are not many vestiges of this Roman Seville but we will find in the historic center some remains that tell us about that era. On Marmoles street there are remains of a Roman temple built between the first and second centuries AD. It is from the time of the Emperor Hadrian, there are three columns that can be seen.

Originally there were six but in the XVI century the city major took three to decorate a new square that they were building in what would later become the Alameda de Hércules. On the way one broke, so in that square they only put two, the other three remain on the original site of Marmoles Street and are located five meters deep, which shows the depth of the city in Roman times.

Most of the remaining walls in Seville, including those of the Alcazar (the Royal Palace), are from the Muslim period, specifically the XII century. However, it seems that there were older Roman ones and stones or their basement were used to build the Islamic ones.

Like almost all Roman cities, the Roman Seville or Hispalis was divided into very orderly, rectilinear streets. There was a main axis that went from north to south and it was called Cardusmaximum, there was another axis that crossed from east to west called Decumanus. In the center there was a central square that corresponded to the Forum. This square was located in the current Alfalfa Square.

Antiquarium is the name given to the Roman archaeological remains found in the center of Seville just below the modern construction Metropol Parasol (“the Mushrooms”), they are about four meters deep and luckily almost all the archaeological remains were saved. There is a total of nine houses between the I and II centuries after Christ. This area corresponded to the rich houses and was very close to the Roman forum.

In the Antiquarium, which is an archaeological zone that can be visited, beautiful mosaics were found built from rich tesserae, some in black and white and others with colorful elements, also columns and more curious elements such as children’s games or lamps.

The fossil river and salted fish

In the Roman Seville times the river Guadalquivir entered through this area of ​​the city. And next to the river there were some warehouses where salting was made, that is, where the fish was salted for its conservation in buckets. Those recipients have still been preserved.

That river is still drained time because it still exist in the subsoil and that is why it continues to flood periodically and the water has to be drained from time to time. This is what is called a fossil river.

Other Roman vestiges in Seville

Roman tombstones were used to build the Giralda Tower, which was the old minaret of the mosque in the XII century, they are made of marble and can still be seen perfectly and contrast with the rest of the tower that was built in brick.

The shafts of columns that are around the cathedral are also of Roman origin, some are in marble and others in granite and joined by chains make up the perimeter of the cathedral.

Other smaller columns but also of Roman origin can be seen in some corners of houses in the historic center, they were used to protect the corners of the houses so that they would not be damaged by horse carts when passing by.

We can see more Roman columns in the arcades of the little shops in the Square of the Bread, one of the oldest squares in Seville.

Archaeological excavations have revealed some Roman Seville remains under the Church of Saint Nicolas, specifically there was a theater. In all Roman cities it was necessary to have amusements so in addition to the theater there was the amphitheater, it would be located below the convent of Capuchinos and it was on the outskirts of the city due to its large size. According to tradition, in this amphitheater the saint patrons of Seville Santa Justa and Santa Rufina could be martyred in the IV century AD.

Also in that area, under some modern buildings, there have been found remains of a necropolis that originally had up to ninety tombs.

You see that under Seville a fascinating city of two thousand years ago extends. The roman Seville still sleeps under our feet about five meters deep. Have a look in our tours to get to know in place this fascinating period https://www.toursevilla.com/tours/

To learn more about Roman Seville, you can visit the unknown Archaeological Museum
( http://www.museosdeandalucia.es/web/museoarqueologicodesevilla ), currently closed for works).

The Casa de Lebrija (https://palaciodelebrija.com/) in the historic center that houses the best mosaics of Roman Seville.
And finally, about seven kilometers from Seville, the very interesting ruins of Italica (https://www.italicasevilla.org) another neighboring Roman city of Seville that was also the homeland of the emperors Trajan and Hadrian, but we will talk about these them another day. 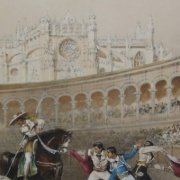 Toursevilla History of Seville 7. The age of Enlightment in Seville. 18th century

Outstading women of Seville in the history

History of Seville 5. The 16th century, the “Golden Age”