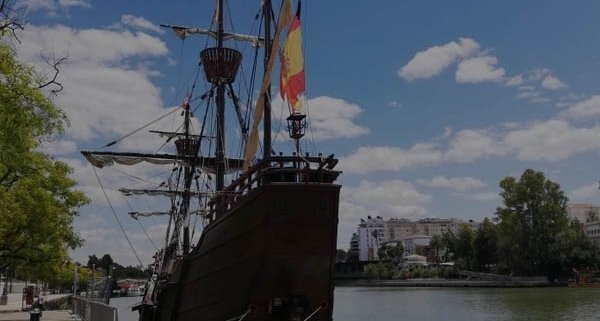 The first around the world trip took place in the 16th century and the departing point and organization was from the city of Seville.

In 1518 Ferdinand Magellan (Fernão de Magalhães in Portuguese) had proposed his idea of reaching the Moluccas to obtain spices to King Manuel I of Portugal. Faced with his refusal, he presented his project to the young emperor Carlos I of Spain and V of Germany, at that time the most powerful monarch of Europe.
In full expansionism of the kingdom of Castile, the emperor supported the company and gave Magellan the money necessary to charter five ships with 245 men. The expedition was going to be very profitable economically if they managed to trade in the Moluccan Islands and get the precious spices there: Cloves, Cinnamon, Pepper, Ginger, Nutmeg …

Why were spices so precious in Europe? Goal for the first trip around the world

In 16th century Europe, spices were almost or so much more valued than gold. Their value resided on the one hand in food preservation and they were also an ingredient for perfumes, medical recipes and a luxury for dishes in an increasingly rich and refined Europe. Like silk, porcelain, and of course gold and silver, there was a great demand for spices.
And the place to find them was far away, on the other side of the world, in the exotic Spice Islands, called Moluccas and today corresponding to the Indonesian archipelago.

To get there, the the usual route was bordering Africa and crossing the Indian Ocean. But that area was in Portuguese power. A new route arose in Magellan’s mind, sailing west across the Atlantic, finding a passage to the Pacific (later known as the Strait of Magellan) and arriving after the long journey to the Spice Islands.
The return route in this first around the world trip would be made bordering India, crossing the Indian Ocean and going to the Atlantic by surrounding Africa.

Three years of adventure and hardship lasted this journey. Of the 245 men, only 18 survived, of the five ships that started the expedition, only one, with a symbolic name, returned to Seville: Nao Victoria (Victory).

Along the way riots, shipwrecks, diseases, internal struggles and fights with the indigenous people threatened the first around the world trip. However, despite the large number of human losses, the objective of the expedition was fulfilled: they successfully traded, returned laden with spices and it was also the first time that the roundness of the Earth was 100% demonstrated.
A milestone that at first they were not looking for, they had made for the first time in History the First World Tour.

Seville, the city who saw the departure of the first around the world trip

The Andalusian city was the starting and ending point of this first around the world trip.

Seville became in 1503 the world center of commerce with America. This decision made by Queen Isabel de Castilla was motivated by the strategic position of the Andalusian city crossed by a river, the Guadalquivir, which was navigable to its mouth in Sanlúcar de Barrameda, allowing the arrival of the ships 80 km inland. This made Seville much safer than any other city on the Atlantic coast.

The Guadalquivir was therefore the gateway to the first products to come from the New World: tomatoes, corn, tobacco or cocoa. And, of course , gold and huge amounts of silver from the mines of Mexico and Potosí (Bolivia). All the overseas expeditions managed by the House of Trade, nowadays in current dependencies of the Real Alcazar of Seville.

The Port of Seville in August 1519 saw the five ships commanded by Ferdinand Magellan in search of the Spice Islands depart towards Sanlúcar de Barrameda first and then west.

A Portuguese and a Spaniard

Ferdinand Magellan, captain and ideologist of the expedition organized this trip with the help of the also Portuguese cosmographer Rui Faleiro. However, the expedition also included men of 10 nationalities, of whom 166 were Spanish men.

Magellan had the misfortune to die in the middle of the trip in a skirmish with the indigenous people in the Philippines (they would be called with this name years later in honor of King Felipe II). Luck wanted an experienced Basque sailor from Guetaria (Guipúzcoa), Juan Sebastián Elcano, to command the expedition. He was the one who ended the trip in Seville on August 13, 1522 when the battered Victoria with 18 survivors climbed the Guadalquivir and arrived in our city.

In such a way that the feat was shared by two navigators, from two different nations: the Spanish and the Portuguese.

The first around the world trip was made, and with it the roundness of the Earth was demonstrated, since always marching in the same direction, the starting point was reached. The emperor Carlos I, upon receiving Juan Sebastián Elcano, gave him as a shield a globe with the Latin legend: Primus circumdedisti me (“you were the first in surrounding me”). And also 500 ducats of income per year.

In addition to the Guadalquivir river, which witnessed trade and expeditions to the New World and beyond there are historical places and monuments in Seville that inform us and illustrate this important event and the History of the Andalusian capital in the 16th century. These are the most remarkable ones:

if you want to do a guided tour with this theme, feel free to ask us. This is our contact https://www.toursevilla.com/en/contact/

Also we can offer you a virtual tour to know more about this from your home. Our history tours on line take 1 hour by Zoom. Know more here: https://www.toursevilla.com/en/

Juan Martínez Montañes, the God of the wood