The Roman city of Italica in Santiponce 8 km from Seville is proposed to obtain the category of World Heritage by Unesco in the year 2020. This would suppose a fourth monument / historical place of the city of Seville with this distinction after the Alcázar, the Cathedral and the Archive of Indies, all named Unesco World Heritage in 1987.

Italica has some ruins of the II century d. C exceptionally preserved, some mosaics that are counted among the best in Spain and an amphitheater, even in occasional use, that had once a capacity for 25,000 spectators. Also this city was historically the cradle of two of the greatest Roman emperors: Trajan and Hadrian.

Let’s get to know her a little better. 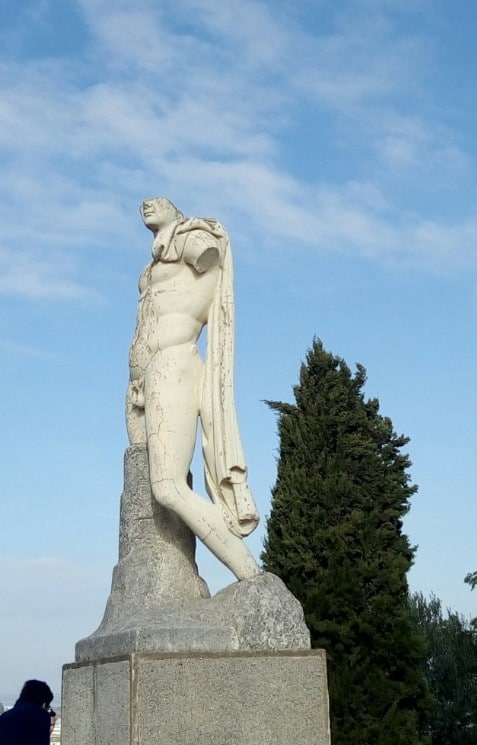 Italica was founded by General Scipio, a prestigious Roman military man in 206 BC, as a settlement for veteran soldiers already retired from the Second Punic War. But that first city of Italica lies under the current town of Santiponce. The ruins we can visit today are an
extension of the city during the time of the Emperor Hadrian in the second century AD, this area was owned by the nearby monastery of San Isidoro del Campo, because it belonged to their properties they were never urbanized, but on the other hand it was object of extensive
plundering and theft. From its abandonment in the 4th century to the 18th century (and officially until the beginning of the 20th century) a plan for the protection and assessment of its historical content was not carried out. This was thanks to the Sevillian archaeologist
Francisco de Bruna, but by then many of his marbles and mosaics had disappeared.

Today it remains of its ancient splendor a spectacular amphitheater in which could fit up to 25,000 spectators, the famous Colosseum in Rome had room for 50,000. In this way, this dimension made the amphitheater an exceptional place for a small provincial town like
Italica.

Here the gladiatorial games were celebrated while in the nearby theater the theatrical representations of tragedies and Greek and Roman comedies took place: Sophocles, Aristophanes or Juvenal.

We can also walk through its ample rich houses, many of them still paved with beautiful mosaics. Let’s not forget that the Italica we visit today was an urbanization for rich families. Each house occupied half a block. Most of them had two floors, a main courtyard or atrium and a back garden where there was a small altar for the home gods. The outer part of the houses was rented for Tabernae, that is, shops: bakeries, hardware stores …

In addition, the life in Italica counted on thermes (public baths), gymnasium (place so that the young people did sport, but that also were schools) and palestra (track of races).

And of course, temples to the different gods of the Roman pantheon and to the Emperor Trajan himself, considered as divine. In the same entrance of the amphitheater, Nemesis (goddess of warriors and Vengeance) and Celestis (goddess of Heaven) were worshiped in
small temples. An ex-voto or offering in the form of a footprint testifies to this.

Who were Trajan and Hadriano

The first Roman emperor was Augustus in the early first century AD. Over the years the imperial Rome extended its borders from Hispania in the West to Britain in the north, from Mauritania and Numidia to the South to Dacia and Parthia to the East, Rome was the most
powerful empire ever known. The greatest extension was in the second century with the emperor Marcus Ulpius Trajan, born precisely in Italica. Trajan was emperor from 98 AD until 117 AD.

His successor Publius Elio Hadriano (was his nephew grandson) kept the borders and was considered one of the best rulers of Rome, traveled throughout the empire and enlarged his city of origin with temples, an aqueduct, statues and the most important amphitheater of the
Baetic province. Hadriano ruled from 117 AD until 138 AD. Its legacy is the city that we know today just 8 km from Seville.

Where we can see the best pieces of Italica

In the same Italica of course from the amphitheater to the theater, passing through some of the houses and buildings with beautiful mosaics such as the Planetarium or the one in the House of Birds.

In the Archaeological Museum of Seville (located in the Plaza de América in Seville). There are also mosaics, the best sculptures coming from Italica, including Diana (goddess of hunting), Mercury (god of commerce) and Venus (goddess of love). And especially the statue
of the emperor Trajan deified.

In the House of the Countess of Lebrija. In this Sevillian palace located in the central Calle Cuna we can see the floors and pavements that the Countess Doña Regla Manjon, great lover of Classical Antiquity, recovered from Itálica and Santiponce 100 years ago. For this reason it is considered the best paved palace in Europe.

Two thousand years later, in the 21st century, the Roman city continues to have a cultural use on a regular basis. There we were able to attend the International Festival of Dance of Italica and the Festival of Roman Theater that take place in a unique setting. They are not
ruins only, Italica is still alive.

The emperor, the sultan and the strange map at the Alcazar